Adding EFI to my Monkey Bike, Part One

If you follow me on social media, you will know I have a bit of an affinity for riding shitty little bikes in interesting places. I’ve done ‘The Monkey Run’ in Morocco and am set to do Scotland in September 2021 and Mongolia in 2022.

I also happen to own a glorious Skyteam ST125, which is a Chinese clone of the classic Honda Z50 Monkey bike but with a 125cc engine, and the bigger brother to the Skytram ST50s used on The Monkey Run.

Despite causing me issues almost every time I do any sort of distance on it, I like my awful little monkey bike and have done quite a lot of work on it… and ridden it in quite a few places it’s not meant to go!

Here is a quick run down on the changes/work I’ve done since owning it;

There are probably a bunch of small changes I’ve missed, but you get the general idea.

So “why EFI?” you ask. Well the main reason, and the reason I do a lot of things that I do is “why not?”

Aside from that, here are a few real reasons;

EFI is interesting to me, and adding it to this bike will be a fun challenge. Most of the bikes and cars I’ve owned and worked on have been EFI as well, so I am more comfortable with it.

Carbs are a pain in the arse to get right. Yes lots of people love them and swear by them, and yes they are ‘simpler’, and that is fine, but they annoy me and it’s my bike, so there.

I’ve had this idea knocking around for a while, and every so often I will get on eBay/Aliexpress/etc and see what I can find. I have tossed up buying parts individually and making it work with something like a MicroSquirt or SpeedDuino, or even attempting my own ECU build (HA!) and I’ve looked at kits designed for small engines that come with everything you need (in theory…)

In the end, I found this kit on Aliexpress and figured for £190, it was worth a shot. Worst case if the ECU was useless it came with most of the hardware I needed and seems to be aimed at the small horizontal ‘honda’ type engines, like the one in my bike.

I also found that ‘Robot Cantina’ on youtube tried this kit on their 420cc stationary engine powered Honda Insight. They start covering it in Episode 19. It’s a cool project, so check their channel out here.

So with all that out of the way, let’s get started!

The kit turned up surprisingly quickly, so I unpacked it and took a look at all the components, it all seemed to be there so I thought I’d do a quick bench test first.

I laid it all out, installed the software it came with and powered it on. It was detected by the software and the fuel pump spun up (I then disconnected it, not a great idea to run pumps dry for any length of time). In the ‘dashboard’ of the software, I could see that the various sensors were working as expected.

The kit comes with the following items;

All in all, basically everything you need (in theory…) to add EFI to a small engine.

Now, the kit as it is, requires only three extra wires to work, +12V, GND (as you’d expect) and an ignition pulse.

On the engine in the monkey bike, this signal comes from a small magnet on the flywheel and a pickup in the engine side case. It’s actually the same signal that controls the original CDI box on the bike.

I figured the next thing to do then, was to try it out on the bike itself. It’s obviously not tuned or set up for the bike (yet!), but I wanted to see if it would at least try to run it, and to make sure all the parts fit as expected.

So I went about temporarily installing it, the main thing I had to do was remove the carburettor to install the throttle body assembly. I then connected the fuel line from the tank to the inlet of the pump, ran a hose from the pump to the filler cap as a return and a hose to the injector.

I connected the ECU loom’s power and ground wires directly to the battery and jammed the ignition wire in to the appropriate place on the engine loom. On doing that I heard the fuel pump whirr and saw the lines fill up with fuel. No magic smoke was coming out of anything so it was time to give it a kick it and see what happens.

I gave it a kick…. nothing.

I gave it another kick… it half fired.

I gave it a third kick… it fired and began idling perfectly!

I filmed a quick video of it running, click the image below to see it. 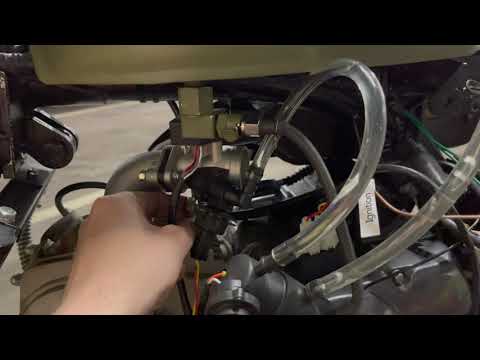 I was absolutely staggered. I figured it would cough and splutter and that would be enough to prove it worked.

But it was just sitting there idling perfectly. The bike was cold at this stage, and with the carburettor it never idled well cold.

I gave the throttle a couple of blips and it happily revved up.

Well, that is that sorted then, it seems pretty likely this will actually work.

As I am intending to use the bike for the upcoming Mongol Rally X, and don’t have time to finish this project before then, I put the carburettor back on and called it a day.

I think I’d call that a success.

That will do for part one, in part two we will dig deeper how I plan to make the wiring work!